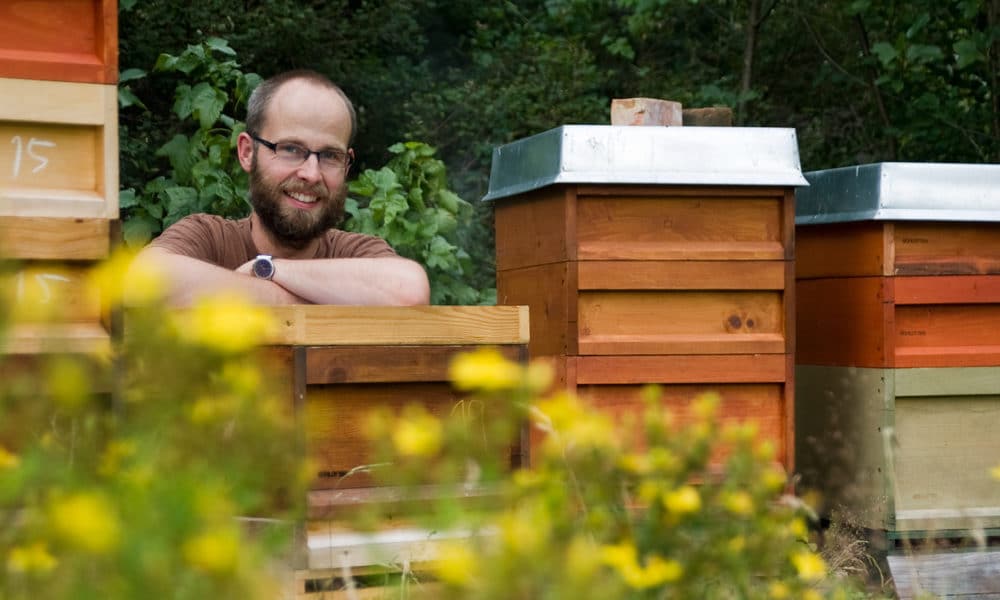 Alexander Schlotter from the Demeter beekeeping Heinrichsgarten® in Dresden was our first supplier for ours Beeswax wraps and continues to supply us today. He has made it his business to keep his bees “according to their nature”. In the following conversation he explains what that means.

Alexander, why did you become a beekeeper?

Beekeeping has a long tradition in our family. But only when I met a beekeeper in 2003 who kept bees on his balcony in Dresden Neustadt was I so fascinated that I wanted to be a beekeeper myself. In 2009 we finally found a suitable area, the Heinrichsgarten, which also gives our honey its name.

With the “discovery” of our 2,400 m² garden at the “Wilden Mann”, a district in the north-west of Dresden, I was finally able to start beekeeping in 2009. During the reclamation, we learned from our neighbors how our previous owner – old Heinrich – had done this and that. He then became the namesake when I was looking for a sonorous name for our beekeeping. The term is now also used synonymously for our community garden.

Some bee colonies are still there. In the meantime, more locations have been added in and around Dresden. Heinrichsgarten® has been the registered brand name for our beekeeping and beekeeping products for several years.

As a Demeter beekeeper you work according to strict guidelines. Why?

Above all, we Demeter beekeepers keep an eye on the needs of bees. For us, it’s not just about the honey yield, but above all about the well-being of the bees – out of respect for life. This is because bees naturally have different goals than beekeepers. The goal of the bee is to reproduce and have the honey as a winter supply. The interest of the beekeeper is to control or even prevent propagation, i.e. swarming, in order to harvest as much honey as possible. We Demeter beekeepers are looking for a balanced compromise in beekeeping. In contrast to other beekeepers, we also see the bee colony as an organism, as a bee being. We call it the “Bien”. Every single bee is part of this “people’s body”, which is much more than just a sum of individuals.

Do the Demeter guidelines also have an impact on wax production?

Most beekeepers, including those of other organic associations, work almost exclusively with prefabricated middle walls made of old wax. Because it saves the bees time and energy if they don’t have to build their honeycombs themselves and use honey in the process.

What are the advantages of natural honeycomb construction for the bee colony?

Beeswax is a metabolic product from the wax glands of the building bees. The honeycombs basically grow out of the beehive of the swarm. The bees decide for themselves how big the individual cells will be and in what arrangement they appear. Honeycomb can be understood as the skeleton of the bee. Only they give the fugitive of the swarm a body without which the bees cannot live. This individuality is not possible with standardized middle walls. The beekeeper only intervenes slightly to ensure that the colony can still be cultivated.

Due to the natural honeycomb construction, swarms always start from scratch in an empty box with completely virgin wax. Of course, this has a positive effect on health.

What is meant by the so-called wax cycle or the wax loop?

Demeter offers two types of wax. “Wax 1” refers to the natural honeycomb wax and the uncapping wax, i.e. the wax that is cut from the honeycomb during the honey harvest. As a Demeter beekeeper, I am allowed to convert this “wax 1”, which the bees produced completely themselves, into dividing walls.

However, if I melt down a honeycomb that contains a central wall, in which there is already used wax, then this wax has to be discarded. This “wax 2” is then used, for example, for beeswax wraps. We speak of a wax loop or an open wax cycle, because the wax only goes through the beehive once and then disappears again.

In conventional beekeeping, the old wax is sometimes reused to make dividing walls out of it again and again. This so-called closed wax cycle also takes place indirectly when beekeepers give up their old wax and exchange it for new dividing walls, which in turn consist of old wax. In such old wax, pollutants that are decades old may accumulate because wax stores certain chemicals. Wax is, so to speak, the long-term memory of the bee colony.

On the face of it, my beekeeping is the same as it is natural and appropriate to the species. On closer inspection, however, there are differences, because the impetus for this designation comes from the anthroposophical field. As already explained, biodynamic agriculture understands a bee colony – including its honeycombs – as an organism, the bees. But not everyone who speaks of the bees has the wholeness of an organism in mind. Each bee has its own essence, its character. When I approach one of my colonies and open the lid of the beehive, I already know who is waiting for me.

The term “essential” is relatively soft and without a clear definition. What is meant is neither a purely bee-centered nor a purely yield- and beekeeping-centered beekeeping. It is about a dialogue between bees and humans to balance the needs of both sides. It is therefore a question of finding a balance, which, as the association for essential beekeeping, De Immen eV, puts it, “the satisfaction of human needs must not harm the well-being and integrity of the bees.”

Dear Alexander, thank you for this interview.