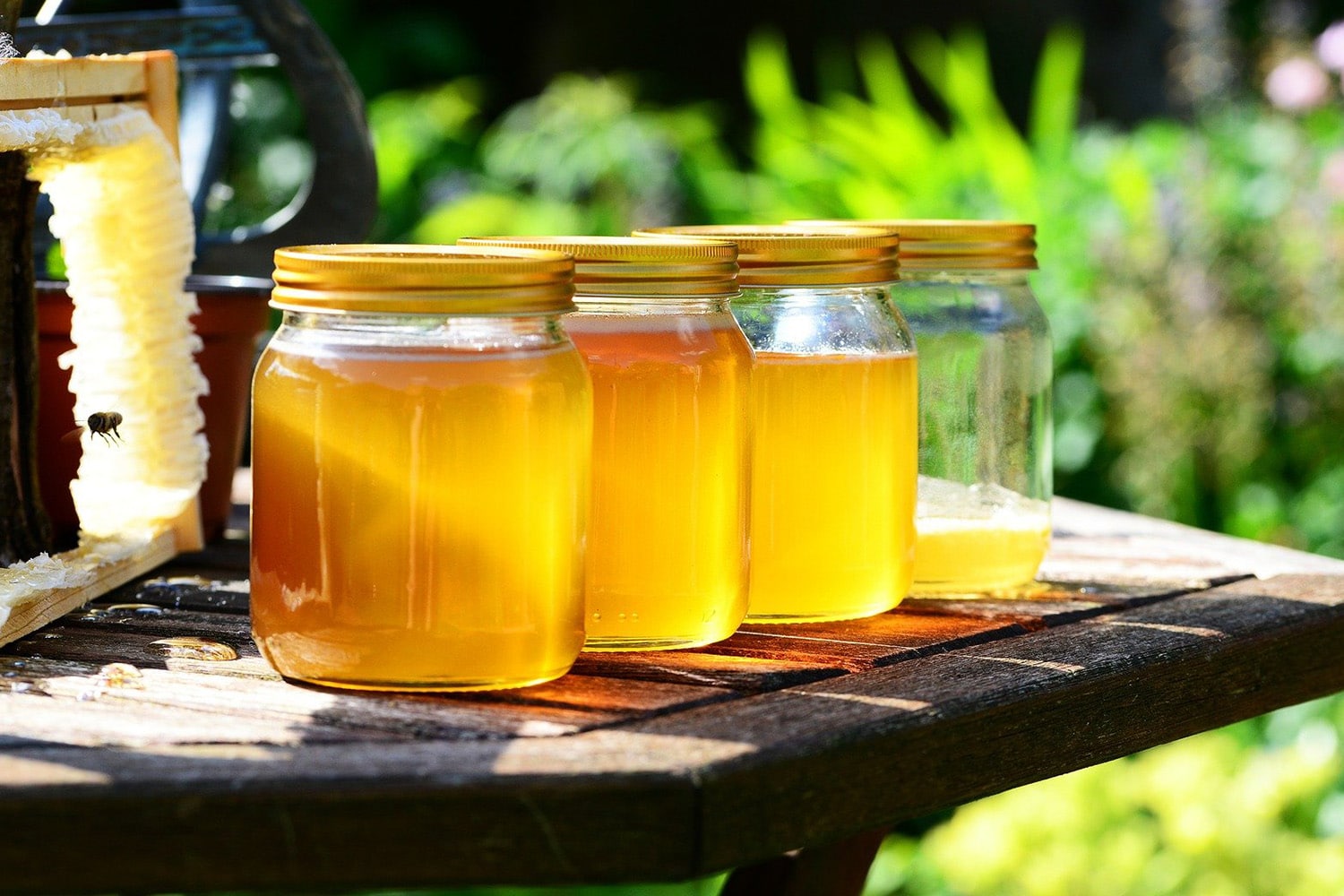 On average, each of us eats more than a kilogram of honey a year. No wonder, after all, honey tastes wonderfully sweet. But is honey healthy? Is it a treat like chocolate or, despite its sweetness, is it a food that belongs on bread every day? Or is honey even an edible therapeutic? Basically all of it. As a food, honey provides us with energy and nutrients. As a stimulant, it satisfies the sweet palate. But honey also has proven therapeutic effects.

That’s why honey is healthy and more than just sugar

Anyone who reduces honey to the main nutrients carbohydrates, protein and fat comes to the conclusion: honey is sugar. If you take a closer look, however, you will see that honey contains many other substances in addition to sugar, such as acids, enzymes, pollen and waxes. In addition, vitamins and minerals such as sodium, potassium, magnesium, calcium and iron. In addition, honey contains phytochemicals such as colourings, fragrances and flavorings, also known as polyphenols. While most of these substances are found in low concentrations, it is this cocktail that is collectively effective for our health.

Honey as a natural antibiotic

The germ-inhibiting effect of honey is mainly due to the acids, the high sugar content, some flavorings and hydrogen peroxide. The latter is known as a bleaching agent, but it also has a germ-inhibiting and germicidal effect. Hydrogen peroxide is formed in young, unripe honey from glucose, water and two enzymes. One comes from the saliva of the bees, the other from pollen and nectar. Depending on how active both enzymes are, different amounts of hydrogen peroxide are contained in honey. In any case, a spoonful of honey for a cold or an upset stomach is an effective home remedy that works against many types of bacteria.

Why honey keeps us young and healthy

Honey is not only effective against bacteria, but also against the so-called free radicals. These are metabolic products that are associated with aging processes and diseases. Antioxidants counteract this. Vitamins C and E are important as antioxidants, but so are the polyphenols mentioned above, i.e. the vegetable colourings, fragrances and flavorings.

Honey also has another very important property for our health: it prevents pathogenic bacteria from gathering in the body and forming so-called biofilms that enable them to communicate with each other. Honey appears to block these bacteria’s communication systems, preventing them from “collaborating” and acting as a cohesive group. This also makes them significantly more responsive to conventional antibiotic treatments.

Which types of honey are particularly effective?

Honey is like many other foods: black bread is healthier than white bread, dark chocolate is better than light and the darker the berries, the richer they are in secondary plant substances. The color of the honey is also a good indicator of its effectiveness against bacteria, fungi and free radicals. Dark varieties such as forest, heather and sweet chestnut honey perform better in this respect than light honeys such as acacia, rapeseed blossom or citrus honey. Incidentally, propolis is much more effective than honey, but unlike honey, propolis is not a food, but a food supplement

Look at the label when buying honey

Honey is most effective when it is natural, i.e. it has not been heated or filtered. Filtered honey is inferior because the filter removes inorganic and organic substances from the honey, including pollen. But don’t worry, this mark of quality is easy to spot. This is because the label can only say “Real German Honey” if the honey is unfiltered. If natural honey is blended with filtered honey, this mixture must also be labeled accordingly. In this case, the label must not bear any laudatory designations, such as single-variety honey.

Does honey make you fat?

Unfortunately, there are hardly any studies on the connection between honey and body weight. However, a study from Austria showed that honey consumption can curb the desire for sweets. The subjects had to eat at least two tablespoons of honey a day for eight weeks, otherwise they could eat whatever they wanted. After eight weeks, almost half of the participants had even lost weight and many no longer had cravings for sweets. The explanation for this is simple: honey has an intense and varied taste and people generally eat less of such intense and complex foods. If you eat dark chocolate, which is also considered relatively healthy, then you usually don’t eat a whole bar at once. By the way, a teaspoon of honey has about 30 kilocalories, a tablespoon about twice as much.

And what about blood sugar levels?

It has been known for a long time that sugar is harmful and not just since the low-carb trend. Because sugar causes the blood sugar level to rise rapidly, which promotes the absorption of glucose in muscle and fat cells and thus obesity.

But sugar is not just sugar. While table sugar consists exclusively of sucrose, honey is more diverse in this regard. The main components are grape sugar (glucose) and fruit sugar (fructose) in a variety-specific ratio, but there are also sucrose, malt sugar (maltose) and other sugars. This is relevant insofar as the individual types of sugar affect the blood sugar level to different extents.

The so-called glycemic index is used to measure how much a food raises the blood sugar level. This illustrates the blood sugar-raising effect of carbohydrate-containing foods in percent compared to the same amount of pure glucose. If the glycemic index (GI) is over 70 percent, it is considered high. An average GI is between 55 and 70 percent. A value below 55 percent is said to have a low GI. According to various studies, German honey – depending on the variety – has a glycemic index of between 49 and 89 percent. Dark forest honey had the highest GI, followed by rapeseed honey with 64 percent. Honeys with a high fructose content, such as acacia honey, have the lowest glycemic index.

However, the results should be taken with caution. Because honey is rarely eaten alone. Together with bread and butter, the glycemic index has to be viewed very differently than with pure honey. But let’s leave the church in the village. Just as consuming fruit high in fructose is healthy in normal amounts, so is consuming normal amounts of honey.

Depends on. One study found that the impact of warming on antioxidant activity is smaller than natural annual fluctuations affecting levels of beneficial polyphenols. However, the honeys react again to the heat supply, depending on the variety. In general, however, one can assume that at least some of the valuable secondary plant substances are retained during cooking.

With regional pollen against allergens

With every gram of honey we eat thousands of pollen. These pollen cause a kind of desensitization because our immune system gets used to them. When there is a lot of pollen in the air again in spring, the immune system does not overreact so quickly, provided you have eaten honey from the region. Traditional medicine recommends eating 2 teaspoons of unheated honey from the area daily for allergen immunotherapy.

Our conclusion: natural honey from the region is healthy and in many cases works just as well as medicine. The big advantage: honey has no side effects. On the contrary, it also tastes really good!